Mark: Getting Back on the Horse is No Easy Task

“Getting back on the horse” is the motto Mark told himself when he was thinking about going back to work. Ten plus years between jobs due to hard times in his personal life made Mark feel like he would never come close to living a normal life. After talking with his support team, Mark decided that he needed a community to help him on his path toward recovery and to get set on reaching some of his goals.

Mark arrived at Webster Clubhouse in Roslindale eager to find something to do during the day and excited to work with people who gave him confidence. He jumped in right away. Mark regularly attended Webster House meetings and workshops, and always volunteered when the clubhouse needed help.

In no time, Mark had built up many new skills and was ready to take on the next step: employment. With the help of the clubhouse, Mark picked up free interview attire, and he was diligent in attending employment groups to build up his job skills.

Finding a job was no easy feat. Mark went to jobs fairs and filled out applications, but it was tricky to find a position that was the right fit. Then, one day, one of the Webster House Employment Coordinators told Mark about an opportunity that she’d heard about through GBEC. The position was a Dietary Aide for Unidine in the dining room of a mental health center, where Mark could put some of the kitchen skills he’d been working on at Webster House into action. Mark jumped at the opportunity to apply. The application process involved making a video explaining why he wanted to work as well as an in-person interview, which could make anyone nervous. However, Mark aced his interview, and since then has been excelling at his job as well.

While at work, Mark helps to prepare food for the many meals the kitchen serves each day, in addition to keeping the kitchen clean. His favorite part of his job is being around his co-workers, and he finds his duties meaningful because he is helping people facing their own hard times get warm meals. Bit by bit, Mark is adding more responsibilities onto his role so that he’s always learning.

His manager has said that Mark is a valued member of the team and does a great job while there. Mark himself has said that while there are many things that he still wishes to work on, he is happy that he is “on the horse riding it and taking it wherever it leads him.” Thanks to GBEC, Mark is reaching his goals, one step at a time.

A Successful Career in the Making at AMC Dine-In Theaters in Framingham!

Chris started working with the Vocational Advancement Center (VAC) in Watertown, MAVAC has been an active Partner with the Greater Boston Employment Collaborative (GBEC). Through GBEC, Chris’s Job Developer saw a job description for crew members and Chris applied to AMC Dine-In Theaters in Framingham. He was called for an interview with the General Manager and after being told about different positions that were available, he chose to become an Usher.

Chris’s job includes checking tickets of guests entering the theater. There are strict processes to follow which include asking for identification for movies with age restrictions even if they appear to be over 18 years of age. Some guests don’t like showing their ID’s, but he cannot allow them to enter unless they show it to him. As AMC Dine-In Theaters does not allow guests to bring outside food into the Theater, there are times that Chris needs to inform guests that they need to dispose of food items before entering the theater.  When guests argue with him over policies, he explains the rules and usually the guest is happy to oblige.

Chris has made his five-month anniversary and is very proud of himself. He likes the respect he gets from managers and co-workers. The managers frequently tell him he is doing a great job, that they appreciate him, and listen to Chris’s feedback about the position and the Theater. They’re very flexible and have successfully made necessary accommodations for Chris. In turn, Chris performs his work to a high standard.  A win-win!

AMC Dine-In Theaters in Framingham offers great benefits including free movies for their employees. They also offer viewing of popular new movies before the public gets to see them. Chris was very happy to see “The Joker” before everyone else!

After Challenges, Ricardo Finds Fulfillment and Success in His Security Role 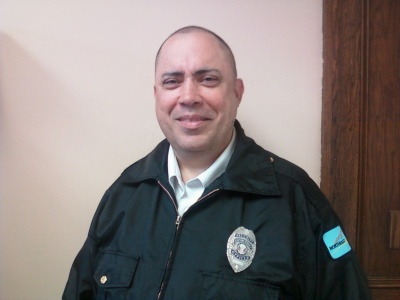 Ricardo had a successful 30-year career as a security supervisor, managing security for concourse patrols and fixed post locations at a large transportation hub. However, despite his seniority with the company, he was passed over for a promotion, and ultimately resigned. Soon afterwards, he faced many challenges with depression, schizoaffective disorder, and physical illness. He spent nine years out of the workforce as he went through recovery.

With the help of employment staff at Center Club and Bay Cove Day Treatment, Ricardo eventually decided he was ready to re-enter the workforce. With their support, he applied for his current position, working with Northeast Security at Emerson College. He started out working 8 hours per week, then moved up to 16 hours per week, and after two years, currently works full time. Despite his disabilities, he is excelling in his role greeting and welcoming guests, directing guests where they need to go, providing information, and enforcing access control policies. Ricardo says that he is able to work full time because of the reasonable accommodations that are provided to him through the help of Center Club, Bay Cove Day Treatment, and his employer.

In his own words, Ricardo says, “My work helps me to keep busy, which lessens my symptoms.  I feel very fulfilled by my work; I feel productive in society. I feel more useful and validated. I feel fulfilled when I help people. My goals are to help people more at church, which I can do more because I have more money now. I want to help the needy, help the poor. I also want to help my daughters pay for college.  These are some of my dreams for the future.  I also want to plan financially for my retirement."

According to his evaluator at work, "Ricardo has always been a reassuring presence. I always felt like the residents, as well as my staff and myself, are safe and secure with Ricardo at his post.  He demonstrates the utmost professionalism, always keeping a vigilant eye on anyone going through the lobby's exits and entrances and remembers every face he sees.  Ricardo goes out of his way to assist anyone who may need help in any way, whether it is helping those with luggage or disabilities through the doors, making sure any visitors or deliveries are being properly signed in and out, or giving directions to anyone who may need them. He is a valuable help to myself and my own tap desk staff when the lobby is busy or crowded.  He sets himself apart from other security officers at Emerson with his devotion not only to keeping our community safe, but to making an effort to have a personal relationship with and showing compassion to everyone he meets.  I could not recommend him more highly for any role as a security officer or beyond." 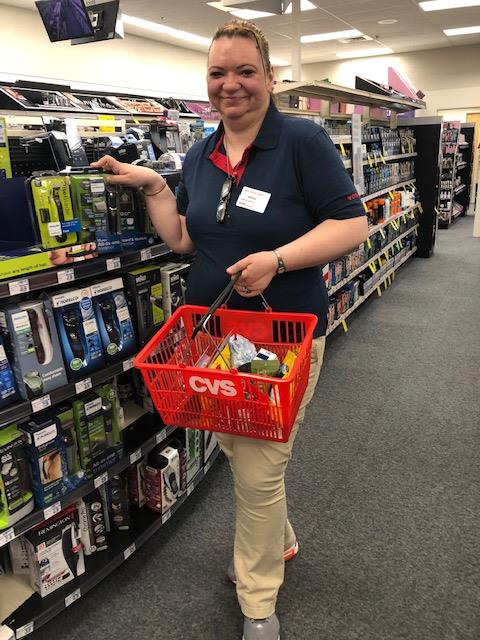 Jessica is a member of Charles Webster Potter Place, a program of The Edinburg Center, and recent participant of the CVS Health "Abilities  and Abundance" Program provided through the Greater Boston Employment Collaborative.

Jessica had a goal to return to work, but was not sure how to begin the process. As someone with previous retail experience, she was thrilled to hear about the 12-week training program through CVS Health. Over the course of the program, she improved her cashier skills and broadened her customer service experience. Jessica describes herself as friendly but somewhat shy when meeting new people. She wanted a chance to overcome  her nerves and increase her confidence when communicating with people she did not know. The program’s soft skills training workshops gave her the interpersonal and networking tools to begin her 40 hour internship at CVS Health in Watertown, MA.

During the internship, Jessica said she enjoyed learning how to face products and check expiration dates on inventory. She said she appreciated the weekly performance reviews with the store manager because it allowed her to identify personal strengths and weaknesses. Jessica’s progress since beginning the training program has been palpable. Her confidence and enthusiasm has increased both at the internship and at Charles Webster Potter Place. The CVS Watertown store managers were impressed with Jessica’s positive attitude and determination to learn, which led to a part-time job at the end of the 12 week training program.

Jessica continues to use the skills she’s developed to improve her interactions with customers and her ability to communicate effectively with coworkers. Jessica is thankful for being part of the training program, looks forward to continuing her journey at CVS, and growing her skills within the company.

I started working in a Transitional Employment position at Marshalls in October, 2018.  Halloween was coming, and in the break room they had materials for staff members to design little pumpkins with paints!  I remember decorating a pumpkin before I went home one day, and there was also homemade egg salad that someone had brought in.

One of the first things I learned at Marshalls was how to work in the beauty/women’s health department. I also learned how to arrange the men’s perfumes and colognes upstairs. They bring out new products each time I go there.I went there yesterday just to check my schedule, and there were some new products! I like that.

My main task is to work in the dressing room. I take the clothes from each customer and count the items, and then I give them a ticket with the number on it. If they have more than ten items, then the customer has to leave some outside of the dressing room. They can try up to ten at a time. Once they’re done trying on the first ten, then they can try the others. They can see which ones they like and don’t like.

The customers give me the items they don’t like, and I organize the clothing by size and by department. Normally you might not get to talk with people in the store, but people feel comfortable talking with you in the dressing room – the business people, and then the moms.  I like that they have a big fitting room for both men and women. They have huge fitting rooms in case anyone is disabled. If a person is disabled and needs help in the dressing room, then we give their helper a card that says “Just Visiting” when the helper goes into the dressing room.

People like to ask my opinion about clothing. People ask about the sizes, and they ask if they look nice. I say, “Yes!” They have clothes at Marshalls for every type of person. I get to see all the newest fashions, all different kinds of fashions. I like looking at them. As I walk around the store I think about what I might want to get for myself. I haven’t gotten to look at all of the home goods yet, but I want to.

I think I’m lucky, because on the street people don’t talk to you but at Marshalls they do. I never thought I would talk with businesspeople, doctors, moms, and all kinds of people. You never get bored with all the different kinds of people.